Now it’s just the beginning of November of the autumn leaves season.And in Japan, if I have a girl of 3 or 7 years old or a boy of 5 years old, I go to shrines or temples and pray for the healthy growth of their children.And just our children are the age.We decided to go hiking in The Mountains and we would pray for their growth.I assumed that there would be traffic jams and congestion, but the weather was just fine, so I tried it!

First, what time do you arrive the best?

The day is Sunday.Oyama also offers free parking and car access for a fee.However, I want to park in the parking lot near the cable station as much as possible.I wanted to arrive by 9 a.m., but there was a restroom break for the children on the way, so I came to the driveway of the hill in Oyama around 9:20.I was able to park in the new parking lot in front of the koma-approach.The price is JPY 1000.In the parking lot around here, it’s better to aim for clothes from eight to nine o’clock.

The cable car was already waiting 30 to 40 when we arrived near the cable car by the koma-approach.So we were going to go on a mountain trail.There are 2 road for the hiking,Onnna-saka and Otoko-saka.We choiced Onna-saka road.Otoko-saka is more tough than Onna-saka,I think.

My family chose Onna-saka.There was information that the autumn leaves of Onna-saka were beautiful beforehand, and i was attracted to “There are seven wonders in Onna-saka”, and decided to proceed.At first, it was a very gentle climb.I climb while enjoying “Seven Wonders” with a child.

From the point of bumping into Otoko-saka, climb the last stairway, to the foot of the shrine under the shrine!I climbed from about 10 am and arrived just after 11 am.It was a mountain path for about an hour.From the time i crossed Oyamaji Station on the way, the stairway became tighter against fatigue, but if i took a break on the way, and if the child was willing to ride, I was able to climb it.However, especially in the second half, the stairs are high, the cliffs are close (of course, the guard is guarded), so you need to be careful about that. 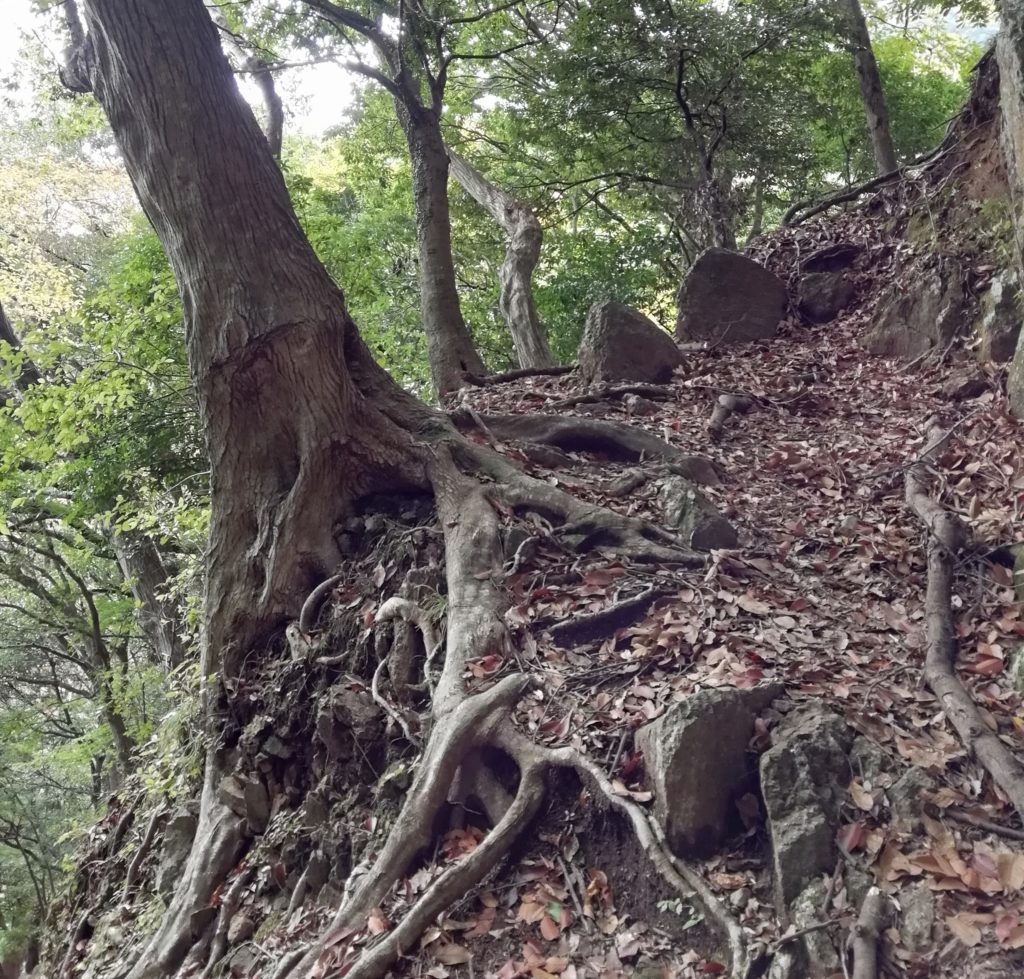 Witness wild deer on the trail in the second half!

In addition to the tea house, children can enjoy eating and drinking, such as a stylish pancake shop.My family chose a tea house because they wanted to eat dumplings.In addition, the cold and the taste were very rich and delicious.The curry next door seemed to be delicious, too.

The scenery of the visit and the autumn leaves at Shimosha

The area around Shimosha was the most beautifully colored.After taking a break at the tea house, I got a happy charm.Thats my memories symbol for the Shichi-Go-San. The children were able to climb while feeling close to nature!I was pleased with the sense of accomplishment.

The stairs are high and tired, so we go down by cable car.The cable car was able to ride without lining up at that time.I delayed one and went to the front seat.I was so excited about the cable car as we looked sideways on the road we climbed!

On the way back, we went to the parking lot to buy persimmons and vegetables, eat shears and rice crackers.Both children and adults were very satisfied with the great mountain hiking!

Where can I stay with my children in Legian?The Bandha Hotel is next to Legian Beach!
Prev

[TOKYO] I went to Machida Squirrel Garden!A small garden where you can get in touch with squirrels a lot

What kind of place is the squirrel garde ...

There are many villa hotels in Ubud.We a ...

Due to coronavirus, it is likely to be a ...

【Bali Ubud】What is the place to enjoy with children in Ubud?Meet a lot of monkeys in Monkey Forest and experience nature!